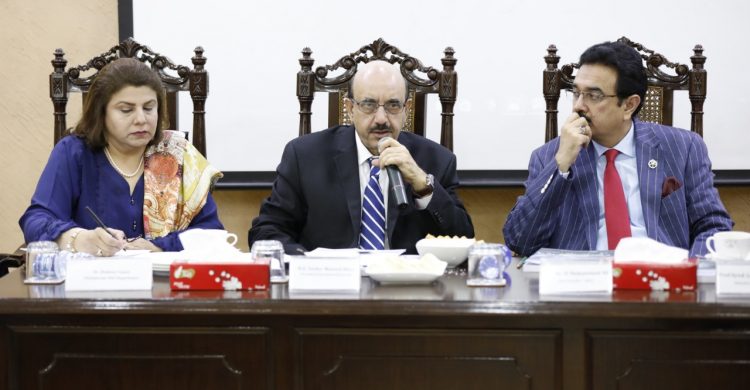 India’s growing bellicosity in Kashmir and against Pakistan manifests in its military modernization plan, ceasefire violations across the LoC coupled with threats of use of nuclear weapon and India’s water politics endanger the regional stability and national security of Pakistan. In this regard Islamabad Policy Institute (IPI) organiz 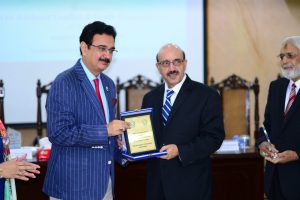 The event had been organized to bring together leading academicians, policy makers, military officials, young scholars and students so that they could exchange views and enhance their understanding of emerging security and threat matrix of the region. The Panel included Dr. Salma

The president AJK Sardar Masood Ahmed Khan in his keynote address said that Indian threat to Kashmir was in reality an existential threat to Pakistan. Referring to India’s aggressive designs and particularly BJP’s ideological fountainhead RSS’ war frenzy, he said, the nation must remain prepared for war. Emphasizing the RSS’s influence on BJP government, he said, the war hysteria and rise of extremism in India was being “driven by the fascist agenda of violent groups” linked to ruling BJP. He feared that a nuclear conflict was very much possible because once the conflict moves from conventional to strategic level, then it would difficult to control the events.

Vice Chancellor Quaid-e-Azam University Prof. Dr. Muhammad Ali condemned the atrocities being committed by the Indian forces in Indian Occupied Kashmir and reaffirmed support for the suffering Kashmiris. Executive Director IPI Prof. Sajjad Bokhari said denial of self-determination for Kashmir in 1947 continues to have consequences until today. Speaking about the tensions between Pakistan and India and the threats to peace and stability in the neighbourhood, and it is particularly worrisome because of India’s hegemonic designs, its pursuance of offensive military doctrines, nuclear blackmail, rejection of proposals for strategic restraint, and refusal to follow the path of dialogue for resolving outstanding issues.”

Dr. Salma Malik, delivered a talk on “Exploiting the strategic fault lines”. She contended that although annulment of Article 370 on A 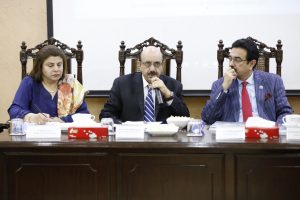 ugust 5 may not have changed the status of Kashmir conflict, but it was a worrisome development because it has aggravated the plight of the Kashmiris and Modi’s antics were threatening peace in the region. Dr. Nasrullah Mirza, on this occasion, gave a presentation on water dispute. In his view, Kashmir and Indus disputes were intertwined in nature and have strong linkages with war and peace in the region.

Head of Department Dr Shabana Fayyaz called for pursuing a multi-pronged strategy on Kashmir in which international community should be engaged more effectively, peace lobbies within India should be contacted, Pakistan be made stronger through better governance and improved economy, and national consensus and unity be strengthened.