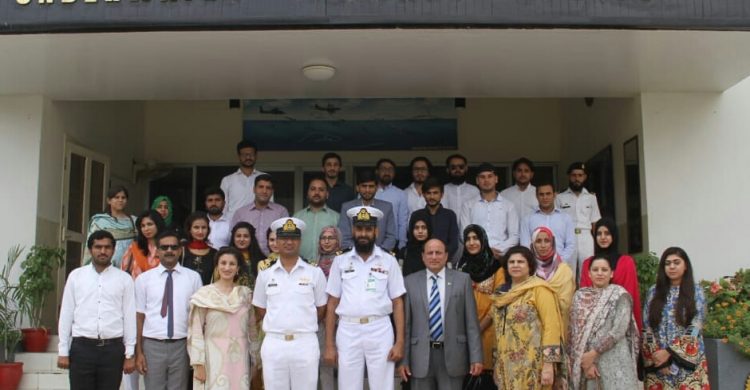 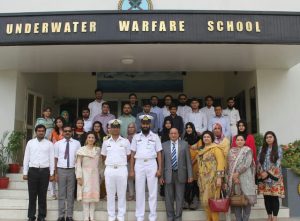 Department of Defence and Strategic Studies (DSS), Quaid-Azam University (QAU) in spirit of upholding its tradition of holistic and interactive approach towards academic excellence and experiencing professional preparedness, regularly organizes visits of its students to different strategic organizations. Purpose of such visits is to expose its students to the operational and specialized working environment of such organizations. Between 14-17 September 2018, in collaboration with Pakistan Navy and Air Force, a delegation of 27 MSc. and M.Phil. Students and Ph.D. Scholars, led by 04 faculty members visited Karachi.

PAF facilitated air travel back and forth to Karachi, whereas local hospitality was extended by Pakistan Navy at PNS Bahadur, Karasaz. During the four-day study trip , the delegation visited Pakistan Maritime Museum immediate after arrival, where the 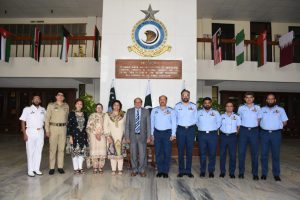 On the second day, arrangements were made for the inspection of various schools and laboratories based at the Karsaz, including schools of under-water warfare, weaponry, communication at surface, under water and hydrography. After a briefing at COMPAK office, the delegation was taken to the JMICC to experience real-time navigation, information gathering and intelligence sharing. The delegation also visited the Naval School of SSG, based at the Manora Island. Then the delegation was taken on board PNS Aslat, the first purely indigenously built naval destroyer of Sword class and briefed about its war-fighting capabilities. The delegation was served lunch in the wardroom at Aslat. At each station, the students and faculty were given VIP reception and gracious hospitality was extended by PN.

Our illustrious alumni form an integral part of DSS family; courtesy to Air Commodore Fawad Zaheer (graduate of 2004-5) Chief Instructor at the Air War College, the delegation visited the prestigious Air Museum and enjoyed the elaborate display of aircraft and weapon systems developed over the decades, including the historic Dakota aircraft that remained in the service of Quaid-i-Azam Muhammad Ali Jinnah. The delegation took great interest in the personal library of legendary war hero, Air Commodore (late) M M Alam, where Air Commodore Fawad Zaheer served high tea to the DSS family. 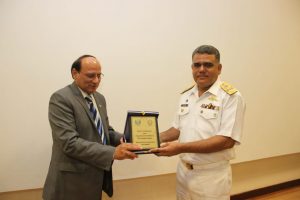 On the third day the delegation was taken in the open sea and had an exclusive and exiting experience of the slightly rough sea. Later, the delegation visited the mausoleum of the Quaid-i-Azam, and paid its respects, offered fateha at the graves of the founding father and his sister Mohtarma Fatima Jinnah, Nawabzada Liaqat Ali Khan and his wife Begum Liaqat Ali Khan and Begum Noor-ul-Amin. The delegation also visited the museum at Mazar-e-Quaid displaying artifacts remained under personal use of our founding father, Muhammad Ali Jinnah In the evening the delegation had an excursion visit to beach at DooDarya and had a shopping spree at Dolman Mall. For this the department remains indebted to our alumnus SSP Sajid Amir Sudozai (Graduate of 2004-5) in facilitating the excursion trip to the beach and shopping districts.

On the morning of the fourth day the students were taken on a guided trip of the prestigious Air War College at Faisal Base, Karachi, and the DSS faculty had a roundtable interaction with the senior directing staff, comprising the deputy commandant, chief instructor and team of directing staff of the Air War College. The roundtable was chaired by Air Vice Marshal Abrar Ahmed. At the end of roundtable Dr. Nasrullah Mirza, Head of the delegation expressed profound thanks and gratitude for providing opportunity to such an enriching roundtable interaction with the faculty of Air War College. In the afternoon the delegation was seen off by Air Commodore Fawad Zaheer at Faisal Air Base and the delegation departed back to Islamabad.

The trip was extremely rewarding in terms of educating the students about the importance of Maritime security, working environment, professional excellence in functioning of the Pakistan Navy. The students and faculty were equally excited to see the incorporation and inclusion of indigenous technology and the advancements made by Pakistan Navy and Air Force in strengthening the country’s power potential.