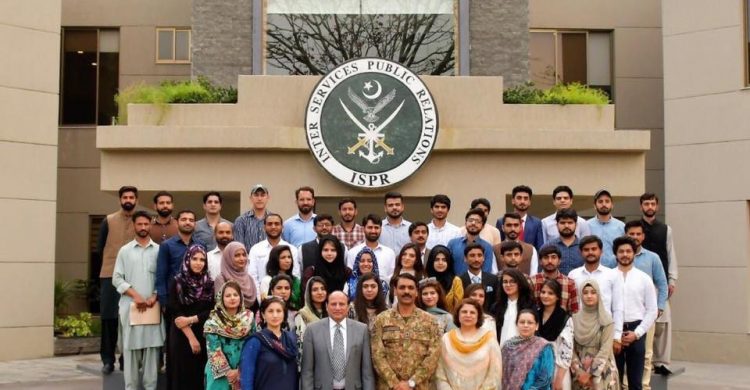 Students of DSS Department and faculty members visited the office of the Inter-Services Public Relations (ISPR) on Thursday, April 11, 2019. Besides being treated to a documentary on the genesis and the current security situation and the role of armed forces, the students also walked through the History Wall, which commemorates Pakistan’s national heroes, the men, women, soldiers, independence leaders, young martyrs who sacrificed their lives for the nation, besides a year to year account of our independence and freedom struggle and the modern history of the country. The tour was conducted by Col Adnan, on behalf of the directorate.

Later in the briefing room, a candid and detailed briefing on current security and conflict dynamics was provided by the Director General ISPR, Maj. General AsifGhafoor. A wide range of issues covering Indian elections, Balakot strikes and their repercussions, hybrid warfare, changing dynamics and challenges to peace and security, military’s counter terrorism efforts and many other issues were raised by the students and dwelt in detail by the director general. He students enjoyed the informal and frank interaction and asked many questions which cleared their doubts.

The session concluded over an exchange of mementos and group photograph.