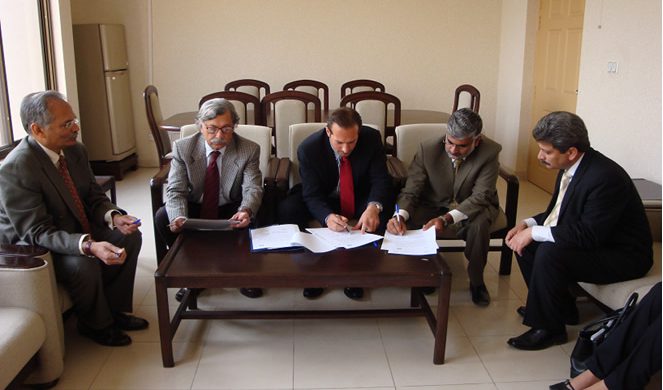 On Monday 25th January, 2010, MoU signing ceremony was held at the Department, between the DSS Department, QAU and the German Foundation Konrad Adenauer Stiftung’s Pakistan Office. On behalf of the DSS, the Chairman of the Department, Prof Dr. Syed Rifaat Hussain signed the document, whereas the KAS was duly represented by its Regional Director for Pakistan & Afghanistan, Dr. Babak Khalatbari. The MoU was signed in the presence of and duly verified by the Registrar and Honorable Vice Chancellor of the QAU.

The KAS administrative staff was joined by the DSS faculty, along with the university PRO Dr. Nazeer Hussain. The signed agreement entailed the convening of a “Bilateral Conference on Prospects and Challenges in Afghanistan-Pakistan Relations” on April 27th-28th 2010 at the DSS Department as part of the KAS – DSS Collaborative Program on Afghanistan – Pakistan Bridge Building. The conference would bring together scholars and academics from Pakistan and Afghanistan, who would speak on issues of mutual concern. The conference would primarily draw an equal number of students from Afghanistan (Kabul & Heart Universities) and DSS Department, QAU, besides other participants. The logistical and travel arrangements for the Afghan delegates and students would solely be managed by the KAS. The proceedings of the conference would later be published in the form of a book, which would be a joint publication of DSS Department & KAS.