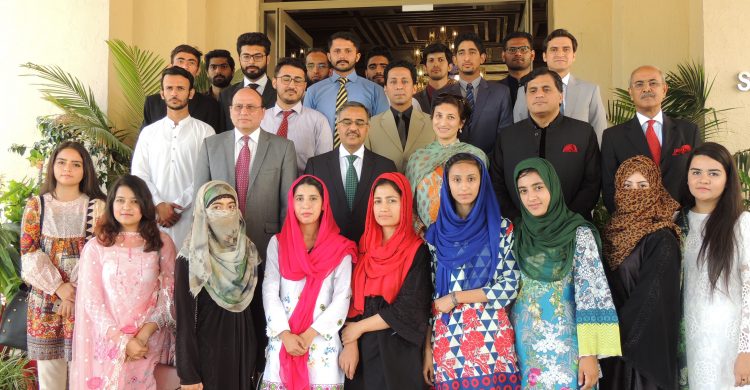 The students of MSc Semester 02 were given an up close and personal experience of foreign policy making, when a trip was arranged by their visiting professor, Ambassador (Retd.) ShahidKiani to the Ministry of Foreign Affairs, on Friday April 19th. The students accompanied by department faculty, were given a candid and detailed briefing on the fundamentals of foreign policy, the emerging geopolitical scenario, challenges, impediments and opportunities for Pakistan and how developments both domestic and external impact foreign policy, the decision making process and the country’s credibility and standing in the global arena.

The briefing was given by the official spokesperson of the Ministry, and DG South Asia, Dr. Muhammad Faisal, who also responded to a host of questions, posed by the students. The questions raised pertained to the Indian intransigence and atrocities in the occupied Jammu and Kashmir region, future of the SAARC, the future of Pakistan – India relations after the Indian elections, the developments across the Line of control and india’s aggressive military posturing. The students and faculty members of DSS were later joined at tea by the Foreign Secretary Ambassador Sohail Mehmood, who chatted in a friendly and informal atmosphere with the students. Earlier the chair Dr. NasrullahMirza presented a departmental shield to Dr. Faisal, who reciprocated with a shield as a memento of the visit. The students also were given a guided tour of the SahibzadaYaqub Khan block by Ambassador Kiani and shown the MoFA library. The visit terminated over a vote of thanks by Department chair and group photograph with the Foreign Secretary, and Ministry officials.