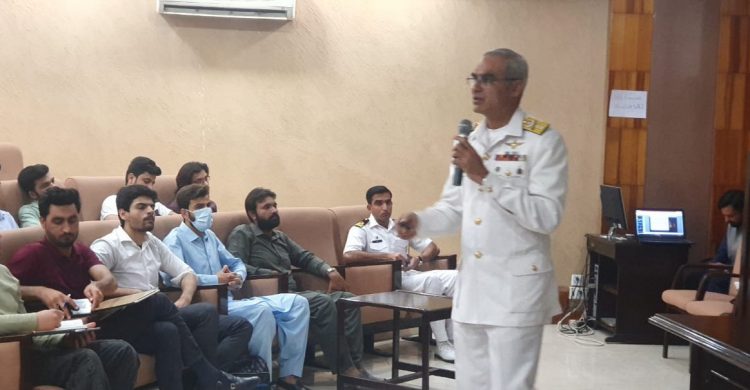 The Speaker educated the audience about the concept of blue economy, the potential of maritime resources, as Pakistan is one of the most endowed countries with one of the most diverse coastlines, that comprises of fifth largest mangrooves forest that are a source of livelihood for 500,000 people. According to survey estimates, there are immense oil reserves, which are yet to be explored fully, which can provide great revenue earning for the country in the coming decades.

He also emphaised and highlighted the economic potential through tourism , fisheries, and ship making and breaking industry, with more than 95% of the country’s trade dependent on sea, Pakistan still lacks a maritime vision . it is the answer to country’s rising unemployment, energy crisis, food insecuritybut due to several aspects including inadequate resources to explore and exploit, lack of private sector initiative and ivolvement, non-optimised port operations and slow pace of development, the country stands to loose on the immense economic value of the martitime sector. he further elaborated on the potential of Gwadar port, which is termed as the jewel in CPEC crown.