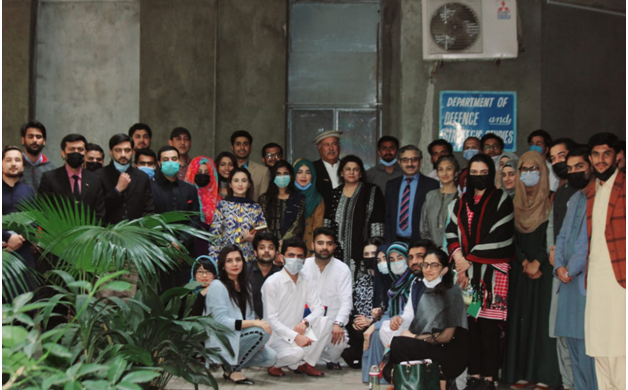 In order to raise awareness about the impact of lethal autonomous weapons and unmanned arsenal, Islamabad based NGO, Sustainable Peace & Development Organisation (SPADO) led by Mr. Raza Shah Khan held a youth symposium. The SPADO has previously held several events on raising awareness about anti-personnel landmines, illicit weapons etc. with DSS and through its youth engagement program has DSS students and alumni participating in its various activities. This event also involved Ms. Mubeen Ashraf, MPhil DSS as the Master of Ceremony, representing the SPADO.

As the expanded use of unmanned armed vehicles has dramatically changed warfare, bringing new humanitariann and legal challenges, rapid advances in technology are resulting in efforts to develop fully autonomous weapons. These robotic weapons would be able to choose and fire on targets on their own, without any human intervention. Giving machines the power to decide who lives and dies on the battlefield is an unacceptable application of technology. Human control of any combat robot is essential to ensuring both humanitarian protection and effective legal control. The day long symposium had speeches from the SPADO team comprising of Mr. Raza Shah Khan himself, Brig. Afridi. Dr Shabana Fayyaz represented the DSS department. The SPADO also played awareness videos and short documentaries for the students, who attended in a large number. The session concluded with a Q&A session and distribution of certificates, amongst the participants.