Seminar on “Inhumanity in Jammu and Kashmir,” organised by Institute of Regional Studies (IRS) Thursday March 04, 2021. 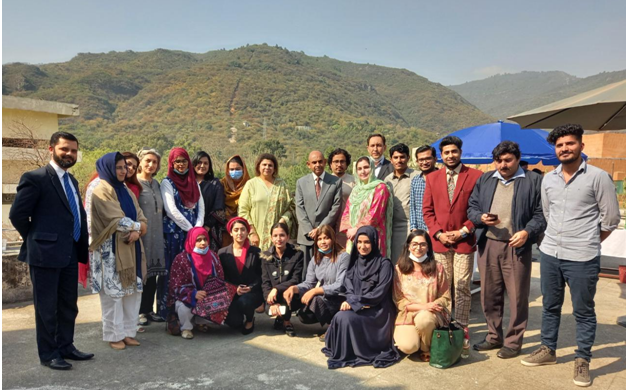 Seminar on “Inhumanity in Jammu and Kashmir,” organised by Institute of Regional Studies (IRS) Thursday March 04, 2021.

On March 4, 2021, the Institute of Regional Studies Islamabad, a partner institute to the DSS Department, held a Seminar highlighting the Indian inhumanity and atrocities in the illegally occupied Jammu & Kashmir. President AJK, Sardar Masood Khan in his keynote address stated that, “there is a need for constituting an international tribunal on the pattern of Nuremberg for trying the Indians responsible for human rights violations in the Indian Illegally Occupied Jammu and Kashmir,” he also recalled the recent jurisdiction claimed by the ICC over the Palestine, and recommended a detailed study to further explore the legal aspects. The seminar also had Former minister for social welfare in the government of Kashmir Ms. Farzana Yaqoob who urged the youth to raise their voice about the Indian atrocities against Kashmiris through the use of social media. Head Department of Defence and Strategic Studies Dr Shabana Fayyaz shed light on the curtailing liberties of Kashmiris under the BJP government in India, especially after the abrogation of Articles 370 and 35-A. Summing up, President IRS Amb Nadeem Riyaz that the value of freedom was realized best in its absence.
Write up prepared by Ms. Merab Bhatti MPhil DSS (02) Spring 2021